KS1 rounded off their science topic on wild and wonderful animals with a trip to Pets at Home. The children enjoyed a fantastic workshop and leaned how to keep their pets healthy and happy, as well as using scientific language to describe the animals specialisms and eating habits.

Children in Y3&4 took part in a biomimicry workshop at BAE systems. The children designed and engineered models based on animal characteristics and specalisms. They also had the opportunity to explore a Hawk aeroplane and even spray paint a wing, thanks to the wonders of virtual reality.

Y6 planned and delivered sporting activities for the whole school - an afternoon enjoyed by all!

A great day out at Lancashire Science Fair at UCLAN  - The children asked lots of interesting questions and shared some great scientific thinking.

Neil, Helen and Susie from the Ribble Rivers Trust joined us in school this week to run a workshop. The children in KS2 had an opportunity to find out more about their local river environment and identify the animals and plants that live there. They also got the chance to model how rivers are formed using a fantastic piece of equipment called a fluvial geomorphology stream table!

The juniors enjoyed lovely weather as they took part in archery, canoeing and grass-sledging at Waddow Hall.

JACK AND THE BEANSTALK

Having defeated the giant, Jack set off back home. Just as he was about to clamber down the beanstalk he had a thought. What if he dropped the precious golden eggs tucked into his pockets? Luckily for him the KS1 engineers were on hand to help him. They considered their materials and developed plans that would have a strong hard surface for protection but also something soft. They wondered how something soft could help protect an egg and thought it was because it would help to absorb vibrations. Finally they tested their designs from a 1m bean pole. They all worked, so Jack didn’t have a problem getting his eggs back to his mum.

Hansel and Gretel have managed to escape from the wicked witch – but the problem is that the trail of breadcrumbs that the children left to guide them home have been eaten up by birds! Fortunately our science club engineers put their heads together and came up with an algorithm to guide them out of the forest. Then they had to design a contraption to drop the information deep into the forest where Hansel and Gretel were waiting patiently.

The Science club engineers are a creative bunch and they came up with lots of ideas that they built and tested. These included zip wires, parachutes and hot – air balloons.

Science club engineers to the rescue!

GOLDILOCKS AND THE THREE BEARS

This week the children had to solve a major problem for the three bears. An uninvited visitor (you will know her as Goldilocks), had broken baby bear’s chair. So the bears decided that there was safety in numbers and wanted a chair they could all sit on.

First the children brainstormed features they thought the chair should have. They came up with words like: strong, long, steady, comfortable. They then came up with imaginative designs that they built and tested.

The children also discovered that being an engineer means that you have to persevere and be prepared to make changes.

The three bears were very pleased with the end results!

The children had to design a bridge that was strong enough to support the Billy Goats Gruff weight for 30 seconds.

They had a selection of materials including building blocks, straws, plastic cups and lolly-pop sticks. As well as supporting the weight of the goats, the bridges had to stretch over a 40cm wide river

The children designed and built their bridges, testing and adapting their designs as they went along.

The final results were very impressive.

Santa Claus needed some Christmas trees in a hurry, so he has raided the kitchen cupboard and found some spaghetti, marshmallows and midget gems. The children in KS2 were given these materials and  in teams had to produce the tallest tree they could that would support a marshmallow star. The winning team manged 50cm!

Children in Need: Challenge Yourself

The children in EYFS and KS1 had a fantastic day at Skipton Castle. Our tour guide Peter, showed us all around the castle and impressed us with his magic tricks. Some of the children's favourite rooms were the old kitchen, toilet, bedroom and the dark and scary dungeon! The children were all extremely well behaved and were able to both ask, and answer lots of questions about castles and the people who lived there.

A fantastic day was had by all the children at Brennand's as they learnt about the culture and lifestyle associated with the Hindu religion. They had opportunies to try different food, learn a dance, immerse themselves in creating amazing pieces of art and  have a mendi design painted on their hand. The children also discussed similarities and differences between their culture and the one they had just experienced.

The children in KS2 enjoyed a visit from Professor Tuesday from Lancashire Museum Service.

They considered historical sources in order to find out about the causes and cures known at the time before discussing in groups what it would have been like to live through this period.

The children particulary enjoyed posing in a Plague Doctor's mask and having a cuddle with a black rat (not real!), which we now know, along with its fleas, actually caused the Plague.

Our focus this time is engineering. We have set ourselves a project to build a marble run out of a cardbox box, cardboard struts and sticky tape. But that's the easy part - we want our marble run to last 60 seconds!

We are setting ourselves other challenges as well. Did you know that you can make balloon kebabs? We found out that if you pierce a balloon in the place where the rubber is under less tension, you can make a small hole and the air doesn't escape with a loud pop?

To finish off our science club we invited parents in to a science fair so that they could see and have a go at our engineering challenges.

The upward steam of air produced by the hair dryer is at a lower pressure than the surrounding air. When the upward force of the air is the same as the weight of the ball, the forces are balanced and the ping-pong balls look like they are floating.

Working on our marble runs: thinking, making,testing,evaluating. Making them last a minute is harder than you think!

Children explored states of matter with the team from UCLAN/Lancashire Science Festival. Togther they used dance to show how matter can change from solid to a liquid and then to a gas.

Members of the newly formed Code club were joined for their first session by Code Club volunteer John Duxbury. 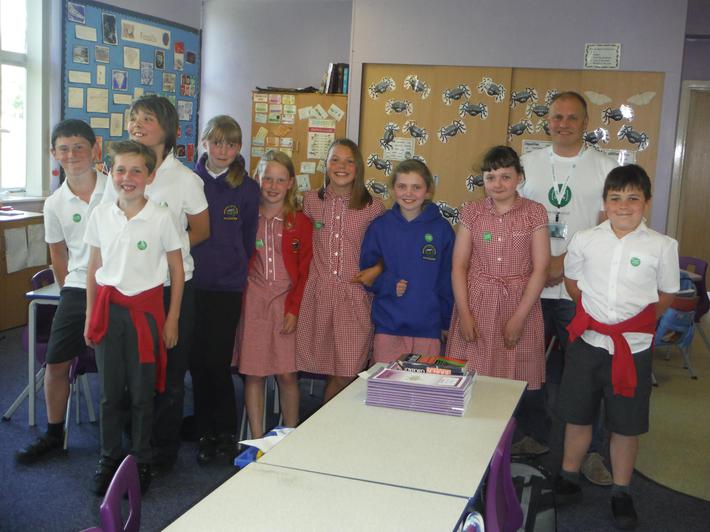 Over the past few months Miss Makinson and Mrs Snape have been working hard to develop our forest schools area. Thanks to their hard work, along with parents and other volunteers who have provided important resources, they are now in a position to use this lovely facility and offer sessions to the children in school. The plan is over the next academic year to incorporate this into our school timetable to enrich the curriculum.

Children from Years 5 and 6 attended the cricket tournament held at Chatburn School. First we competed against Grindleton, losing narrowly by 7 runs. We then faced a strong Bolton by Bowland side who batted well to a victory. Everyone worked hard and enjoyed the afternoon.

It’s all about the chemistry……

This week we made a fabulous lava lamp out of the following ingredients:

We all watched in fascination as bubbles of coloured water rose up through the oil. But what was happening? Well it was all down to a CHEMICAL REACTION and the fact that oil is less dense than water so floats on top of it. The fizzy tablet reacts with the water and creates bubbles of carbon dioxide. The carbon dioxide wants to escape so it travels upwards, taking the bubbles of water through the oil and creating a cool effect!

As soon as the tablet was used up the bubbles stopped, but not to worry – pop another tablet in and it all starts again! 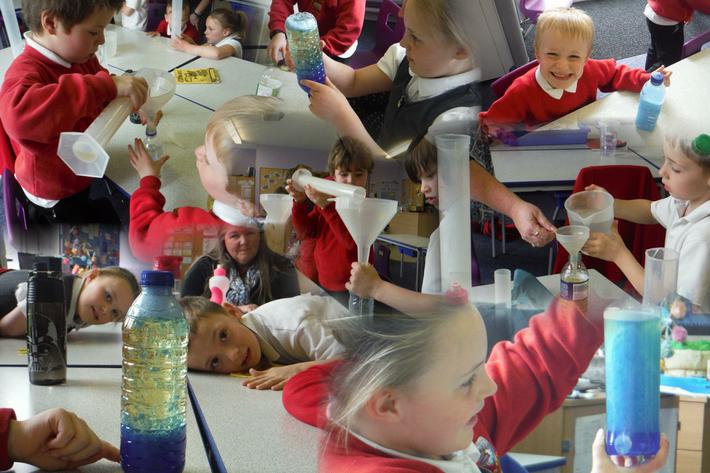 How would you describe a solid? You might say that it feels hard, that you can pick it up easily, that it holds it shape.

What about a liquid? You might say it’s difficult to hold, it’s runny, it can change its shape.

We normally know what to expect when we have a solid or a liquid. Sometimes though not all solids and liquids behave in the way you expect them to.

For example – take some cornflour and add some water. You will notice something rather strange. Pick the mixture up and roll it into a ball – it’s a solid. As soon as you stop rolling it drips through your fingers like a liquid.

What you have got is a Non- Newtonian fluid. It is actually a liquid but when you put pressure on it the small particles bunch up together just like a solid. 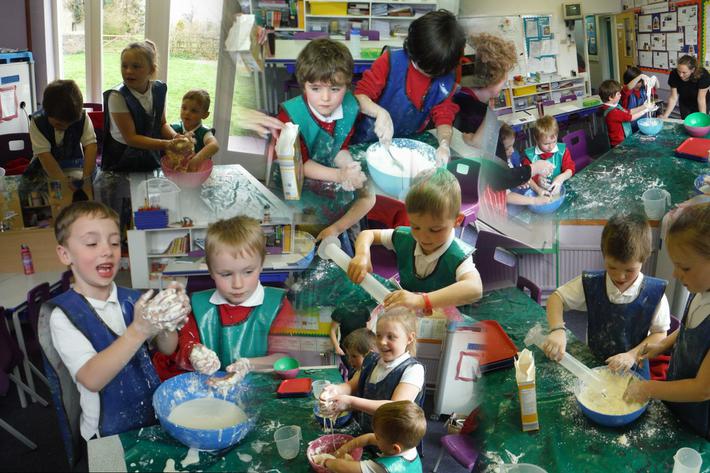 How Sticky is it?

This week in science club we investigated various sticky substances to compare just how sticky they are.

We compared honey and golden syrup, glue sticks and a home-made glue made from flour and water.

Our unit of measurement was how many marbles the sticky substances can hold up. These are our results and they might surprise you:

Honey and golden syrup – between 10 and 11 marbles.

Homemade glue 50+ marbles! ( We actually ran out of space in our measuring cup – it was full to the top with marbles.)

So if you ever need to stick something and you can’t find the glue, head to the kitchen and mix together some flour and water. It is scientifically proven to be very sticky stuff! 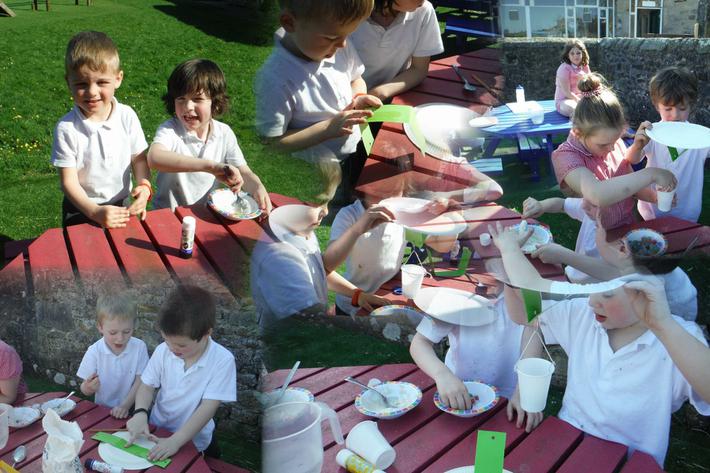 On Thursday 15th March children, parents, friends and staff were joined by members of Preston and District Astronomers Society (PADAS). After a very informative talk, everybody got a chance to examine telescopes and meteorites brought by members.

Refreshments came in the form of hot chocolate and toasted marshmallows prepared over the firepit in our new Forest School area.

It was just a pity that the clouds also decided to join us - making it tricky to spot stars in the sky. Fortunately many children had made planetarium umbrellas so at least they knew what they could have been looking at. 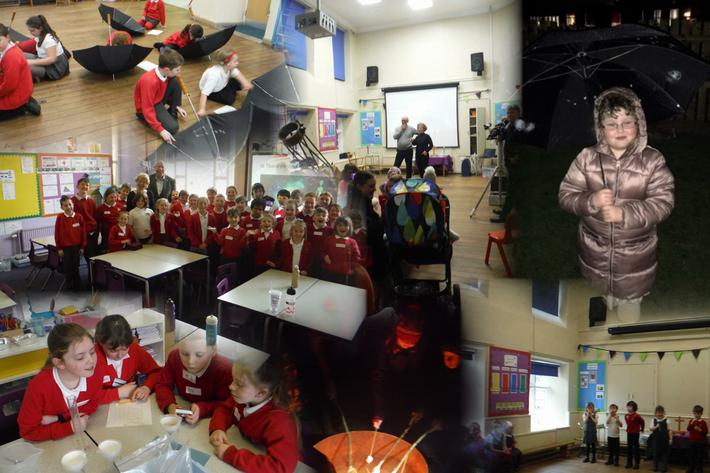 During this week, pupils from all key stages took part in a variety of sporting activities: skipping, yoga, and an obstacle course. Y6 also did their bikeability course on two of the days. To end the week, Y6 leaders organised and led a circuits event, to which parents were also invited to attend. A great sporty week for all!

The Teams
Team B in action
Watching with baited breath!

Daily Mile - children clock up their miles in the playground

Welcome to the gallery! Please enjoy browsing our photographs.

At the end of the term we invited preschool, infants, staff parents and carers to find out about what we had been studying and have a go at activities we had had designed.

Before the big day we agreed a menu for our Great British Space wrap that demonstrated our understanding of nutrition for all and the particular needs of astronauts. As well as this, we also pooled ideas and created an activity circuit based on the Mission X activities.

We allocated roles so we were on hand to explain to visitors what they needed to do and why as well as give out information about nutrition and hydration.

included our space ambassador, Allan Clement, who joined in enthusiastically.

An out of this world Christmas performance!